The Snooks, who came in from the cold 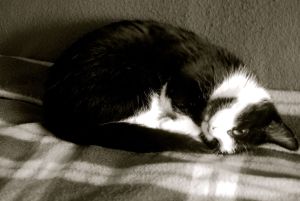 No one but The Snooks knows The Snooks’ life before Nov 25.  I can only guess. And Imagine.

The first time I saw him was on a rainy Monday morning. It was one of those deluges. He was hiding on a pair of boots that my neighbors had left on the porch.  He was the size of my palm, with more fur than body. He squeaked and cried, but I didn’t bring him. I was late for an appointment but I thought about him all day.

There are so many stray cats here in Mostar. Cats that dig through dumpsters, and those that haunt the old city. Some cats have regular people who feed them. Others are just lucky to find something edible in a dumpster.  They are all the same breed, Turkish Vans with large muscular hind legs. I have seen a fair number of “tuxedos’ plus solid white, solid black, a few tabbies, and one beautiful white cat with a tabby tail and tabby patch on his head like a hat. Most people just ignore them.

Then, two weeks later, the kitten turned up as my husband and I were walking to the apartment. I recognized it instantly. He was the same size and ran up to us, crying. I fed it a small plate of cat food which it devoured in a few minutes. So, I gave him another. When I saw him shaking as he ate, I brought him inside.  He spent the next two days glued to me, and he was so thin that I wasn’t sure he’d make it. It was out there starving for two weeks.

But where did he come from? Female feral cats tend to remove the male cats so as not to inbreed. Did the mother abandon him?  He was about 3 month old. Just weaned.  Or did the mother die? Did he get lost?  His behavior was that of a small kitten, not one ready to separate from the mother.  Or do some cats just need more nurturing?

But he loves to play. His first few efforts were fumbling attempts to coordinate paws with a ping pong ball, but now, his favorite game is to toy with an stuffed mouse, hiding it under a table or a chair or a shoe. He digs it out, and starts over. Instinct. He climbs on my drying rack. He charges around the house. He even contemplates the images moving across the television screen. Freeze dried snacks are attacked with the energy of a cat attacking real prey.

But he also follows me everywhere, my little shadow.  He grooms my hair, and gives me small kisses.

He does not seem interested in the outside. Does he think about his mother? His litter mates? Is his mother the tuxedo cat with a collar that I sometimes see? If so, did the cat owner abandon the kittens? I’ll never know. Cats live in the 3 seconds of present time. So, The Snooks probably never considers it.